A downloadable game for Windows

Alien Breed 3D was a valiant attempt at creating Doom but for the Amiga, a machine that really wasn't suited for such tasks. The pixels were huge and the viewport was tiny, but it was a technically impressive shooter considering the limitations. It even had some features over Doom - the water effects were amazing and it supported room-over-room and even texture-mapped 3D models. It was my first real experience of a proper 3D first person world in a video game so it was somewhat of a revelation to me. It may not be as tightly designed as Doom, but I have a lot of nostalgia for it, and it has a place in my heart.

This is not a 1:1 recreation of the original AB3D. Lot's of things are different either on purpose to improve the experience for a modern audience, or due to limitations of the engine or my coding ability.

I will continue to update the game as necessary. I also plan to add more maps from coverdisk demos of the game, but these have a different visual style and different enemies and weapons, so they will take some more time to finish. Look out for these in the future!

Thanks to Rayman the Hedgehog, Ozymandias81, Kinsie and DrPyspy for helping me out and/or letting me use stuff they made! Also HUGE shoutouts to John Girvin, whose work on extracting the original AB3D maps was basically vital for this project not to take a million years. There are further credits given inside the .ipk3 and/or during the end credits roll of the game.

This is my first Doom engine project and the first time I've released a big project to the world in general. Aside from the awesome help I've gotten this is mostly a solo effort by me, and I'm not a pro at game design or anything like that, so please bear with me if you have any problems!

Simply run osiris.exe (just a copy of GZDoom) in the zip, or load the ipk3 into your existing GZDoom. You do not need an existing doom2.wad.

The copy of GZDoom is included because I expect people from the Amiga community who aren't necessarily into the Doom modding scene might be playing it, and I wanted to make things easier for them. Please note the included release is for Windows 64-bit - though you can run it on Linux and Mac if you get your own copy of GZDoom and put the ipk3 into it. If you're into Doom mods and running GZDoom already, feel free to just move the ipk3 into your usual place. Be sure to run it as an iwad, it's its own game!

Any plans for a expansion pack and/or a sequel!?

Good news, the bonus content I was working on for the next patch has gotten out of hand and so I'm now considering it an expansion pack! So yes - expect some new levels and stuff at some point!

Thank you for this, I'm enjoying gradually working my way through (currently near the start of level 5). I never played this on the Amiga but regardless, I'm still finding myself pretty engrossed in it! :)

An Amiga version would be extremely cool but unfortunately the engine I'm using, GZDoom, isn't available on the Amiga. So it can't happen unless someone ports it, and I'm nowhere near a talented enough programmer to do this myself, if it is even possible. There is an old version of the original ZDoom from 1999 for the Amiga but it is missing A LOT of features and wouldn't be able to reproduce AB3D to a satisfactory degree. Sorry!

Too bad, but thanks for the explanation.  Maybe 1x1 Patch will also be released for the Amiga version. I also like Project Osiris very much, maybe we'll see it on the Amiga sometime ;)

Hi ArcturusDeluxe,  I've gotta say love your work here.  Really good is v1.0.3.  So good I've been creating some levels for it.  One question though, how do I make a level start with music or add it using the (80) ACS Execute Script?  I've noticed you use alot of them, triggering the music when a player crosses a linedef, but how do I add it so it plays, is it a library file it pulls the script info from?  It always comes back unknown script when I try and play the CD32 ogg file or remake soundtrack in the game?  Any help is appreciated.

Hi! That's so cool that you're making maps for this!

To start with music, you need to use an

at the top of the map's ACS code. AB3DMusicChange is what you want (first argument sets the soundtrack, 0 = modern, 1 = CD32, second is the track name) but note that it's a function so it needs to be called from inside a script, you can't trigger it directly from an ACS Execute linedef action.

To have it play at the start just put it in an OPEN script. See the ACS code inside the currently existing maps for examples. There's also a script to fade the music in, AB3DMusicFadeIn, which I recommend at the beginning because the remake songs loop so they start quite abruptly.

Hope that helps! Let me know when you're ready to show your maps, I'm excited to try them!

Thanks for the info.  Still abit confused.  The ACS code inside the current maps? are we talking about the ZMAPINFO file or the following file acs/osiris.ocs file?  or do I have to add the include entry into the ZSCRIPT file? Is the ACS code for the maps in the ZMAPINFO file?  For example, I cannot do this for it to work?

All the music entries in the ZMAPINFO file are like this "" so I am trying to understand where the game is actually taking the music from when the level is loaded.  I have looked at your TEST map which I see you can trigger music and wind sounds etc..  It seems to pull it from a script number, but I cannot see the info for the script.  I would prefer to be able to use both, trigger music when entering a new level and also to have no music, but trigger it in game for dramatic effect like in your TEST map for example.

In terms of the maps , I am making an expansion so the maps are starting from MAP18 onwards.

Ah sorry, I guess I got ahead of myself. This is nothing to do with MAPINFO. Are you using Ultimate Doom Builder? If so, press F10 or click the Open Script Editor button (like a white document with a red bug next to it, towards the left of the toolbar), it will show you all the ACS scripting in a level.  This is all code that tells maps what to do at specific points, like doors/lift triggers, music changes, and HUD messages (all the scrolly intro text sequences are just really fancy ACS scripts, for example). The #include goes at the top of this part and the AB3DMusicChange() goes within a script.

This page on the ZDoom wiki has a beginner's guide about it and there's loads of information on the wiki in general. And feel free to look at the scripts in the Osiris maps for reference. I'm not familar with other map editors, but if you're not using UDB let me know and I'll see how to do the same in whatever map editor you're using.

Ah! no worries.  I am using the Slade Editor v3.1.13 for editing.  It does allow me to view the scripts and edit map info and add textures.  Adding water and 3D floors for example are fine.  I am wondering if Slade doesn't allow for certain edits, or to view certain files.  If you have info about Slade,  or like you say, can show me how to access the music then please let me know.  I'll check out Ultimate Doom Builder too.  I've used Doom Builder 64 and Doom Builder 2.0 in the past.  Thanks for the help, most appreciated.

So I had a look, in the SLADE map editor, go to View, Windows and Script Editor. Or press Ctrl+5. This is where you enter ACS scripts. Don't get it confused with the Script Manager which seems to be for SLADE-specific scripts! Anyway if you do this in the Osiris maps you'll see how I did stuff. From the regular SLADE interface you can also just click into one of the wads in the pk3 and click on SCRIPTS to also have a look. You'll see a similar bit of code near the top, within "script 100 OPEN", in each map, which does stuff related to the intro texts and then sets the music when the map loads.

So on your own maps, I expect you'll just get an empty document when opening the Script Editor (unless you've done some other ACS stuff). So basically for now I'd recommend putting the following bit of code in here:

Feel free to replace lventry and cd01 with your own choices of course. You should save and then click the blue down arrow at the top of the window afterwards to compile the code. If you get a message with copyrights and Raven Software and such, it's worked. If you get error messages here let me know.

Also I just realised I gave you the wrong code before, it's #import "acs/osiris.acs", not #include.  Ooops! Sorry about that, I was going on memory and its been a bit since I was working on the scripting stuff. Also sorry that such a seemingly simple thing as music choice is kinda complicated, instead of just being able to change the MAPINFO, had to do it this way to get the multiple soundtrack options and dynamic bits, though it's probably a bit overengineered!

PS: I've included it in my app 'Hakros Doom Launcher'

Oh that's really cool! Glad you like the games and thanks for letting me know it's now in your launcher, I gave it a quick try and it seems very cool! Just a minor nitpick, the logo you used is for the old version, would be good if you could swap it for the current one. Here's a clean version of it. Thanks for adding it though! I feel honored for it to be considered among the best Doom stuff with all those other mods.

You're right its the old version i was planning to update it this weekend.

For me AB3D was one of the best FPS at all and this modern port is something unbelievable, a dream that has come true! Hoping to see AB3D II and the other old Amiga FPS here. :)

You've done a fantastic job bring AB3D to the Doom engine.  Great attention to detail and cool improvements over the original.  You can tell you love the game.

At first, I was a little disappointed that the CD32 soundtrack had been removed but your original tunes are fantastic.  They have a really cool Euro-Amiga vibe to them.  Loving your work, dude! :)

The game is awesome. I finished an older version and now I will play again the latest release. It has a great balance, and is really close to the original on level design and opponents. Was waiting for this. 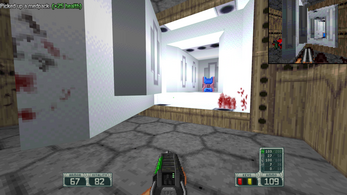 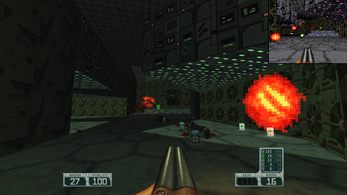 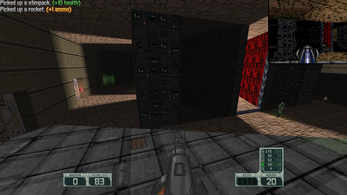 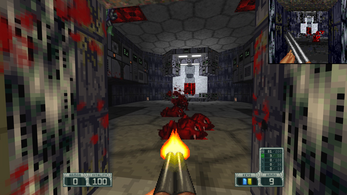 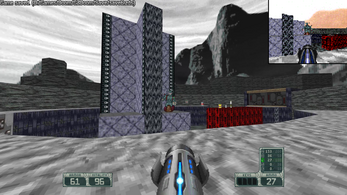 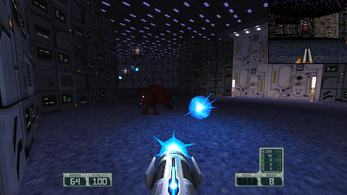